Mapping the structure of cooperation

Over the last year or so I have been developing a web application known as ParEvo. The purpose of ParEvo is to enable people to take part in a participatory scenario planning process, online. How the process works is described in detail on this website. The main point that I need to make clear here in this post is that the process consists of people writing short paragraphs of text describing what might happen next. Participants choose which previously written paragraphs their paragraphs should be added to. In turn, other participants may choose to add their own paragraph of text to these. The net result is a series of branching storylines describing alternative futures, which can vary in the way that they constructed i.e. who was involved in the construction of which storyline.

One of the advantages of using ParEvo is that data can be downloaded showing whose text contribution was added to whose. While the ParEvo app does show all the contributions and how they connected into different storylines in the form of a tree structure it does this in an anonymous way – it is not possible for participants, or observers, to see who wrote which contributions. However one of the advantages of using ParEvo is that an exercise facilitator can download data showing the otherwise hidden data on whose contribution was added to whose. This data can be downloaded in the form of an "adjacency matrix". This shows the participants listed by row and the same participants listed by column by column. The cells in the matrix show which row participant added a contribution to an existing contribution made by the column participant. This kind of matrix data is easy to then visualise as a social network structure. Here is an anonymized example from one ParEvo exercise. 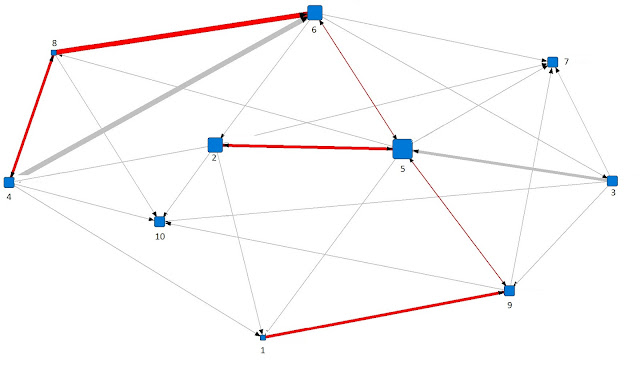 Another way of summarising the structure of participation is to create a scatterplot, as in this example shown below. The X-axis represents the number of other participants who have added contribution to one's own contributions (SNA term = indegree). The Y-axis represents the number of other participants that one has added one's own contributions to (SNA term = outdegree. The data points in the scatterplot identify the individual participants in the exercise and their characteristics as described by the two axes. The four corners of the scatterplot can be seen as four extreme types of participation: 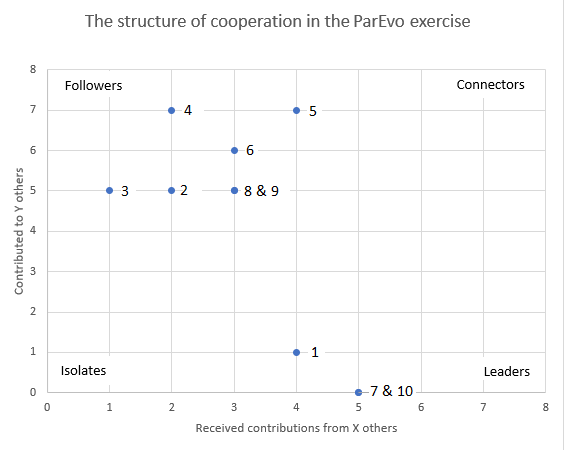 One observer of this ParEvo exercise commented that ' It makes sense to me: those three leaders are the three most senior staff in the group, and it makes sense that they might have produced contributions that others would follow, and that they might be the people most sure of their own narrative"

What interested me was the absence of any participants in the Isolates and Connectors corners of the scatter plot. The absence of isolates is probably a good thing within an organisation, though it could mean a reduced diversity of ideas overall. The absence of Connectors seems more problematic - it might suggest a situation where there are multiple conceptual silos/cliques that are not "talking" to each other. It will be interesting to see in other ParEvo exercises what this scatter plot structure looks like, and how the owners of those exercises interpret them.